Located in the very heart of Manado city, the five-star luxury and unsurpassed facilities of the Sintesa Peninsula Hotel opened its door in October 2008. With easy access to the central business district, 10 minutes from the marina and just 30 minutes from Sam Ratulangi International Airport, the Sintesa Peninsula is destined to become the place to meet in Manado for both business and leisure.

Featuring 150 spacious and modern Superior Rooms, Studios, Corner Suites, Deluxe Suites, Sintesa Suites and a Presidential Suite, the luxurious standards of accommodation will rival those of any major city in South East Asia. Combined with extensive Conference, Seminar and Banqueting facilities, the Sintesa Peninsula is set to become the flagship hotel of Manado.

The capital of the province, the former stronghold of the Dutch and the cultural center of the Minahasa people, for a long time Manado prospered through trade with the nearby Philippines and the spice trade with the rest of the world. Unlike much of the rest of predominantly Muslim Indonesia, Christianity is the dominant religion in Manado. Manado is among the highlights of diving in Indonesia and has earned plaudits throughout the world. When you scuba dive in Bunaken National Marine Park you'll witness some of the highest levels of biodiversity in the world, with outstanding fish variety and world-class wall diving. The clear, warm waters contain astonishingly high numbers of species, whether corals, sponges or fish. The most notable recent find within the park was in 1997, when the coelacanth was discovered living in the lava tubes of Manado Tua. This 'living fossil' fish brought international media attention to Bunaken Island.

ABOUT THE SINTESA PENINSULA JIMBARAN, BALI

Located in one of the exquisite residential areas of Bali Jimbaran, only 15 minutes drive from Ngurah Rai International Airport Bali and 20 minutes away from vibrant area of Kuta and Nusa Dua. The Sintesa Jimbaran is just a short walk to many of Bali’s most famous traditional beach side Seafood Restaurants and is a close drive to Cafes and Bars at Jimbaran Bay and Uluwatu. A complimentary shuttle service between the Hotel and the renowned Jimbaran Beach Club is provided for our guests’ convenience.

To be a successful & profitableinvestment driven group that creates sustainable benefits for its stakeholders.

An opulent Presidential Suite features bright elegant and restful design. Including the modern living room and dining room with a private bar. ...

Bright, spacious overlooking the fish ponds and tropical gardens and adjacent to the main lobby, it is the ideal place to meet for a coffee with friends or to have an informal business meeting. Gat ...

The comfort and casual elegance of the Gardenia Coffee Shop features both indoor dining as well as an outdoor al fresco seating area overlooking the swimming pool and gardens. Featuring buffet pres ... 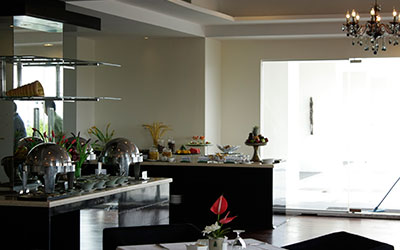 The elegance and private Executive Dining and Executive Lounge both indoor and outdoor located on the 11th floor. With a stunning view overlooking the city of Manado, it is the ideal and exclusive ...

The Spacious and elegant karaoke rooms all features state of the art sound and audiovisual equipment and is the ideal place to entertain friends or business acquaintances. Open daily from 12am unti ...

Stay fit with a great workout on our latest fitness equipment by Life Fitness at our fitness center. A wide range of group exercise such as Aerobic, Body Language and Zumba classes compliments supe ...

Offers spa treatments to invigorate the body, mind and soul with exquisite range of body treatments and excellent products.

The Sintesa Peninsula hotel offers unmatched conference, seminar and banqueting facilities catering for up to 1200 guest, to small private meetings adjacent to our business center. The latest sound ...

Your wedding day should be one of the most important days of your life We offer the most lavish catering and banquet space in the city. Our culinary and banquet staff stands ready and willing to pr ...